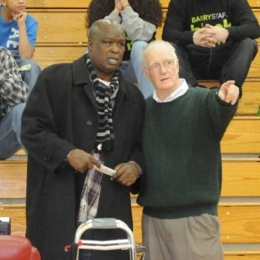 The Sinclair athletic family is mourning the loss of Coach Kevin T. O’Neill who passed away on Thursday, November 5, 2020.

Coach O’Neill retired from Sinclair as a professor of Physical Education and Developmental English after a long and distinguished career.  During that time, he served as the men’s basketball coach for 12 years and was the program’s first baseball coach for three seasons.

Upon graduating high school from Archbishop Stepinac HS in White Plains, New York, he joined the Army and found himself stationed in Germany.  During his enlistment, Coach was very active with extracurricular activities on base as he coached and played both baseball and basketball, leading the baseball team a regiment championship season.

After completing his service to his country, Coach earned his bachelor’s degree from the University of Dayton and master’s degree from Xavier University before embarking on his teaching/coaching career.  That career started in the Dayton public school system at Belmont High School.  Continuing what started in the military, he accepted coaching positions for both baseball and boys’ basketball.

It was not long before Coach moved from DPS to the downtown Dayton campus of Sinclair Community College, launching a successful and meaningful career as a professor and coach.

During his tenure in the PAC (Physical Activities Center), Coach set many records in his 12 years as the men’s basketball coach and recorded the baseball team’s first program victory in 1973.

Coach O’Neill still has the highest men’s basketball winning percentage of 65.7% and his 1969-70 team still holds the record at Sinclair for highest season average for points scored per game, 98.83.  That was not a one-year occurrence; his teams scored over 100 points 57 times including a single game scoring record of 139 points.  He recorded the program’s first 20-win season and finished with a career record of 203 collegiate wins.

During his final year as men’s basketball coach, O’Neill coached a young man from Columbus, Ohio who would go on to become the undisputed heavyweight champion of the world in 1990.  Before James “Buster” Douglas knocked out Mike Tyson, Coach O’Neill had him running sprints and shooting free throws in what is now known as Building 8 Arena.  Always with eye for talent and a motivating practice plan, Coach was able to position a talented young man into the team MVP and NJCAA All-Region performer averaging 21 points per game and 10 rebounds.

The O’Neill family will receive friends with social distancing guidelines being followed from 5:00 pm until 8:00 pm on Tuesday, November 10 at Westbrock Funeral Home, 5980 Bigger Rd., Kettering, OH.  A Mass of Christian Burial will be held at 10 am on Wednesday, November 11 at St. Mary of the Assumption Catholic Church, 9579 Yankee Rd., Springboro, OH.  Coach O’Neill will then be laid to rest in Calvary Cemetery.

Sinclair Community College and the Sinclair athletic family is deeply saddened by the passing of Coach O’Neill.