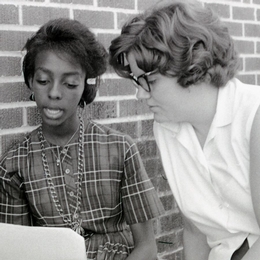 In the spring of 1964, Herbert Eugene Randall, Jr., a talented young African and Native American photographer, was awarded a fellowship to spend a year photographically documenting contemporary Negro life.  He decided to photograph Freedom Summer activities in Hattiesburg, Mississippi.

With gratitude to Mr. Randall, Sinclair will have several of the images from the Freedom Summer project on display in the library loggia on the downtown Dayton Campus from February 1 – March 31.

During the summer of 1964, Randall not only documented the social and political efforts of the Hattiesburg Project, but also vividly depicted the hardships of Negro life in a racially discriminating Mississippi.

Over the course of the ten-week Freedom Summer Project:

Herbert Randall, born in 1936 on Long Island New York, studied photography under Harold Feinstein in 1957, and, from 1958 to 1966, worked as a freelance photographer for various media organizations.  His photographs were used by the Associated Press, United Press International, Black Star, various television stations, and other American and foreign publications.  Mr. Randall was also a founding member of the Kamoinge Workshop, a forum for African American photographers, in New York City in 1963.

Following Freedom Summer, Randall returned to New York to continue his career in photography, serving in several photographic positions with youth organization; as Coordinator of Photography for the New York city Board of Education; and Photographic Consultant to the National Media Center Foundation.

Mr. Randall was awarded the Creative Artist’s Public Service Grant for Photography for 1971-72, and his photographs have appeared in exhibitions at the San Francisco Museum of Modern Art, The Brooklyn Museums, The art Institute of Pittsburg, and other notable museums.  His photographs are permanently represented in the collections of the Metropolitan Museum of Art, the Museums of Modern Art, the New York Public Library, the Library of Congress, and various other repositories.

At the time of this writing Herbert Randall is retired and resides on the Shinnecock Indian Reservation on Long Island, New York.