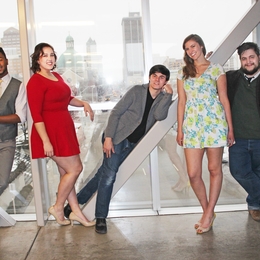 Sinclair Theatre will present Songs for a New World, April 3-11 in the Black Box Theatre, fourth floor of building 2 on the downtown Dayton campus.

With music and lyrics by Jason Robert Brown (Parade, The Last Five Years, and The Bridges of Madison County) "Songs" is a heart-warming musical song cycle about one moment. Brown says: "It's about hitting the wall and having to make a choice, or take a stand, or turn around and go back."

General Admission tickets are available for $15 each at: www.sinclair.edu/tickets

There will be 6 performances with no Sunday matinee due to the Easter holiday. Performances are Fridays and Saturdays (April 3, 4, 10,11) at 8 PM and Wednesday and Thursday (April 8 & 9) at 7 PM. Seating is limited to 80 per performance so advance ticket purchase is suggested.

Join us before Thursday's performance for our popular Dinner and a Show option beginning at 5:30 PM in the green room (2334). A separate dinner ticket must be purchased in addition to a performance ticket and includes a ½ wrap and cup of soup served buffet style with brownie and cash bar for an additional $10.

If you need further assistance, email box.office@sinclair.edu or leave a message at 937-512-2808. Box office messages are monitored by student box office agents who work around their class schedules and return calls as quickly as possible.  The box office is open one hour prior to performances if tickets are still available for purchase at the door. Groups of 20 should call 937-512-2076.