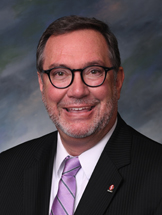 During Dr. Steven Johnson’s 17-year Sinclair presidency, the college has experienced extraordinary improvement in student success rates, and a remarkable expansion of access to include several new learning centers across the region. Sinclair recently began offering bachelor’s degree programs. Sinclair is among the few colleges in Ohio offering the lowest college tuition while delivering results across numerous college departments that are deemed by third parties as among the best in class. Sinclair has no debt, and continuously receives the highest financial ratings among all of Ohio’s universities and colleges. With over 3,000 full- and part-time employees and $160 million in annual operations, Sinclair is among the 15 largest employers in the Dayton region and has repeatedly been voted by its employees as a “Best Place to Work.”

Dr. Johnson is a Dayton regional Leader of the Year; among the Leaders of the Decade; and named one of the “12 Most Influential People” of the Dayton Region. He has also been honored as Humanitarian of the Year by the National Conference for Community and Justice.  President Johnson serves on the board executive committees of the Ohio Association of Community Colleges, the League for Innovation in the Community College, the Sinclair Foundation, and the Dayton Development Coalition. Dr. Johnson holds a Ph.D. from the University of Texas-Austin.